Last night we went to the YMCA to pick up our Swim Team kids. We arrived early so that we could sneak in a workout (it’s been almost two weeks since I was able to find the time). After about 20 minutes, I was ready to quit.

“What time is it?”, I gasped to Kathy on the next machine to my left.

“Seven twenty-four,” she replied. “I’ll bet you hoped it was seven forty-four.” The kids are done with Swim Team practice around 7:45 on Fridays.

I was disappointed at how quickly I had fallen out of ‘shape’, in terms of exercise stamina. There are, unfortunately, some parallels in the area of financial stewardship.

We’ve had a couple of difficult months, in terms of record-keeping. Neither of us seems to have much passion for writing down every little expenditure, and they seem to get away from us in only a few days. When we got home from the YMCA, Kathy whipped out the laptop and we attempted to wrestle the month of January into submission. 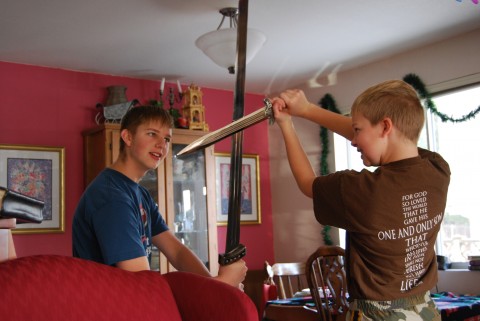 Some months, you have to use excessive force.

First she went through all the receipts, and then I dug up a few more I’d been hoarding. Then we did reconstructive surgery on the month, based upon records from various financial institution. I dusted off my accusatory drone: “On the 17th, someone went to Albertsons and spent $54.23.”

When the dust settled, we had a number of budget category overages, including:

Happily, this was a three-paycheck month, plus I received a small bonus from my company, and I was finally paid for some side work that I did, so there was a lot of ‘slush money’ available. We were able to close the month out and make significant progress toward paying down our debt, so that only 15% remains of what we owed on April 1st of last year.

We were cheered to see the progress, and to feel that we can see the end of the tunnel, with regard to becoming debt free (except for house debt). We have every expectation of paying it all off by the time we get our tax refund (which, in a spurt of financial ambition, I filed last night).

God has been very good to us over the past 10 months, allowing us every advantage in paying off our foolish debt, and graciously encouraging us at every turn. We are so thankful to Him for His provision for our family, and for the strength and determination He has given us in exercising our flabby stewardship muscles.

12 thoughts on “A Brief Budget Update”