When we first chose this house, one of its selling points was that it had a hot tub. We moved our furniture in multiple truckloads ourselves, and it was very nice to steep my weary body in hot water after a day of hauling stuff. Kathy, in particular, took a lot of pleasure from it, and the kids all greatly enjoyed it as a miniature pool. 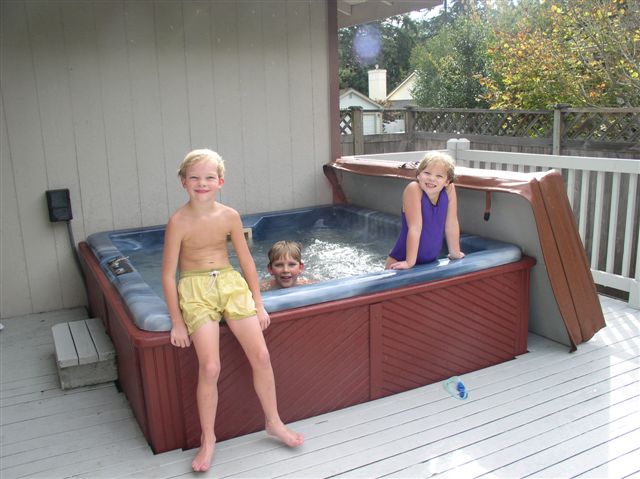 This picture was taken soon after we moved in to this house, back in 2004.

As it turns out, hot tubs (especially older ones, I guess) cost quite a bit to maintain and operate. We estimated it used about $30/month in electricity, not to mention the array of chemicals needed to keep it clean and pH-balanced and the water it needed to stay full (it seemed to have a slow leak).

After a while, we decided we weren’t using it enough to merit the continued cost and maintenance, so we drained and decommissioned the hot tub. Soon, a family of raccoon moved into the base of it, and we began avoiding that corner of the house. Over time, the deck that surrounds the tub began to rot, and our neglect was made complete. 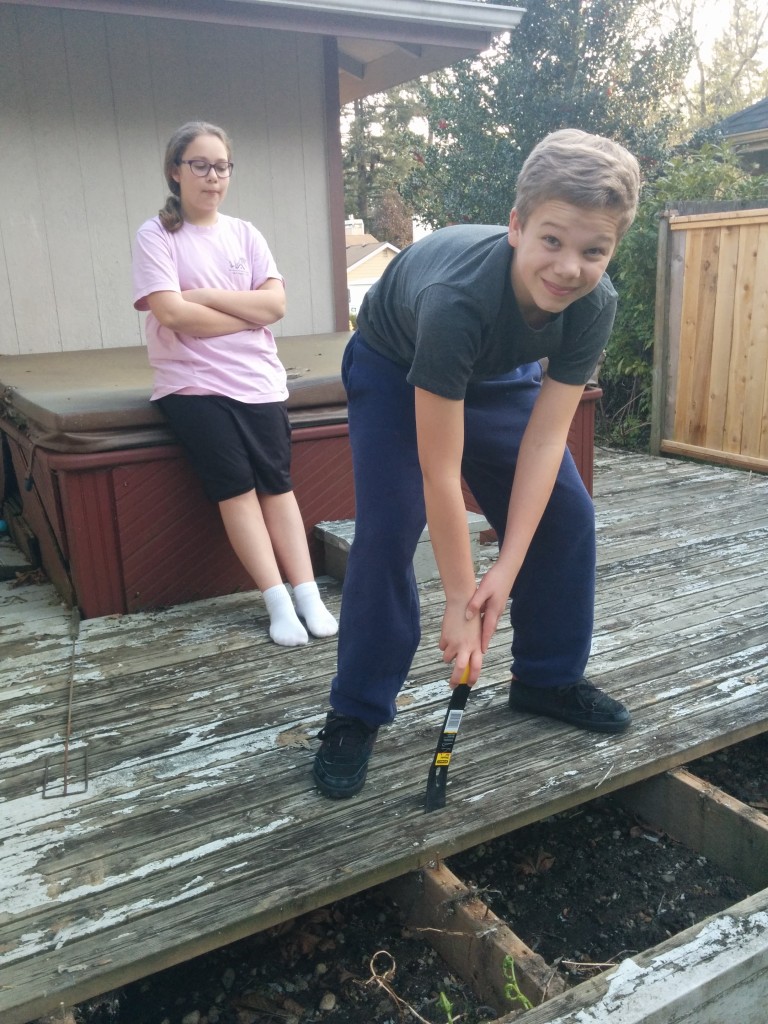 David mightily heaves on a rotten deck board … while Sarah provides moral support.

This weekend we decided to remove the deck around the hot tub, hoping to remove the tub and perhaps rebuild the deck into something more useful. As it turns out, we’re pretty good at removing and disassembling things. Now if we can only improve our abilities in the tidying-up and rebuilding categories. 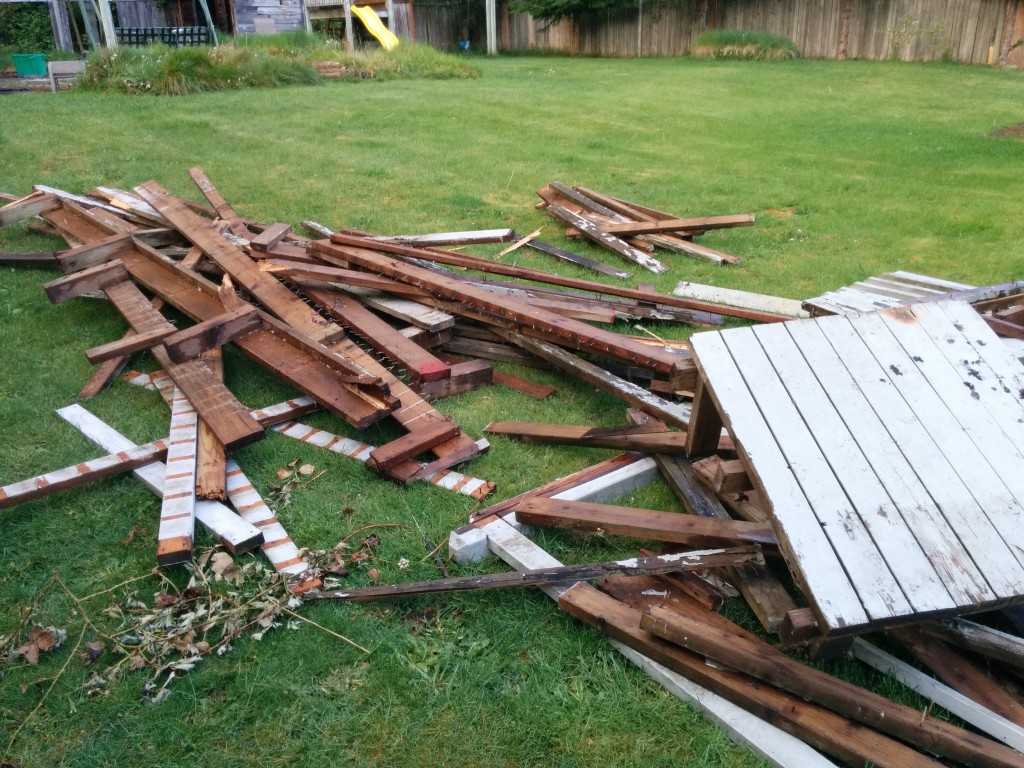 Cleaning up from a demolition project is not our strong suit.

Each Christmas, Kathy’s Aunt Stephanie gives me a new tool, perhaps in the hope that I will one day become more versatile as a handy-man. Kathy’s grandfather was quite handy; he had a huge workshop, stocked with every imaginable piece of hardware and tool — perhaps Aunt Stephanie hopes I will become more like her Dad, if only in terms of my possessions.

Truly a wonder of a bar!

A few Christmases ago, she gave me a Wonder Bar, and it really came in handy on this project. The deck boards were nailed down, and this tool helped to neatly pull up the deck boards with minimal effort. Thank you, Aunt Stephanie, for your generosity each year, and for believing that I could actually put these tools to use! 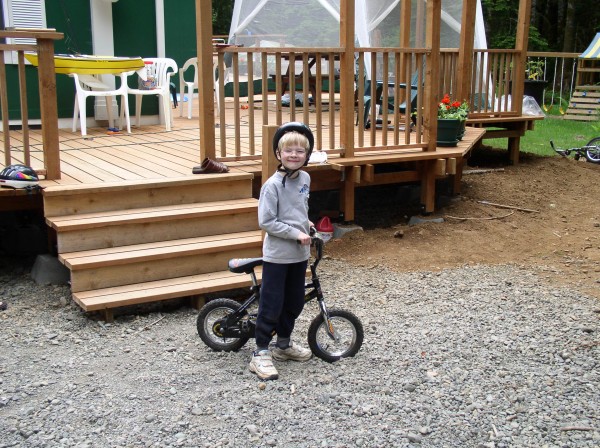 Our deck in the Duckabush is large enough to pitch a two-room tent with lots of space to spare.

As it happens, decks are the one thing that I can build, at least with proper help and supervision. The wrap-around deck at the Duckabush House is truly stupendous, and I built a good half of that myself. Time will tell if we can ever get the hot tub out and a new deck constructed. 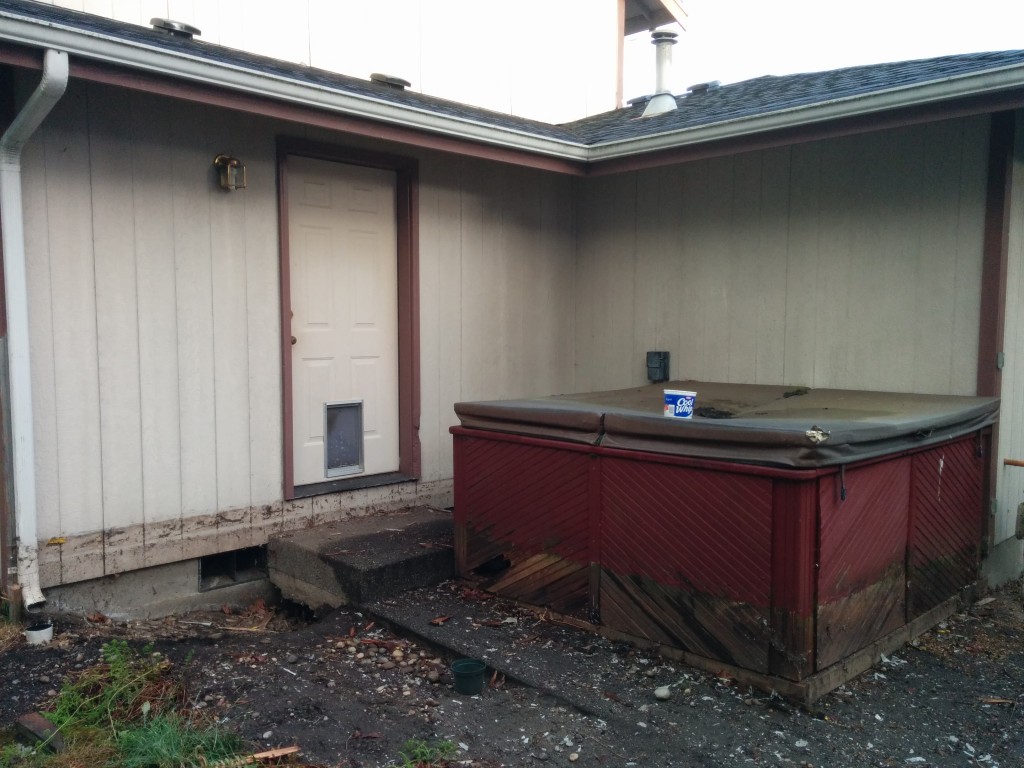 The deck is gone, but the hot tub remains …

One thought on “Wonder Tub”