It was all a dream! Or was it?

David and Sarah had their play performances this evening. They have spent the year studying drama at our homeschool co-op. Last year they were in the class together, but this year David moved up to Center Stage with the older students, while Sarah remained in Limelight with the younger children. Both teachers are dedicated and incredibly talented. They manage to bring out the very best in the kids, as well as design beautiful sets and tackle difficult plays. 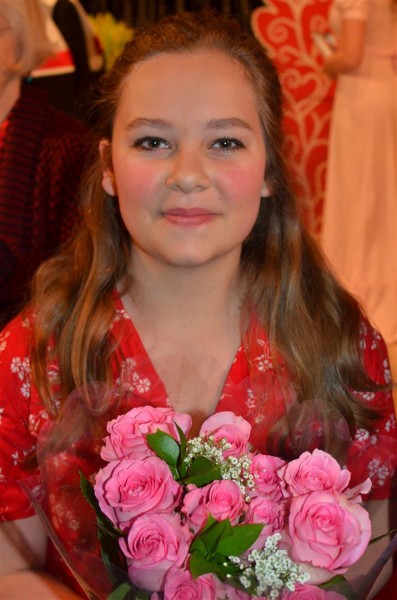 Flowers from her daddy

This weekend, Sarah plays a little mouse in Alice in Wonderland. The costumes are vivid, and the players’ act with the perfect flair of the dramatic needed for this fantasy tale. Nearly all of the students in the play had more than one part. Sarah opened the first act as the mouse and ended it as Alice’s sister. She memorized her lines, followed her cues perfectly, and was calm and excited throughout it all. It has been a wonderful experience for her. 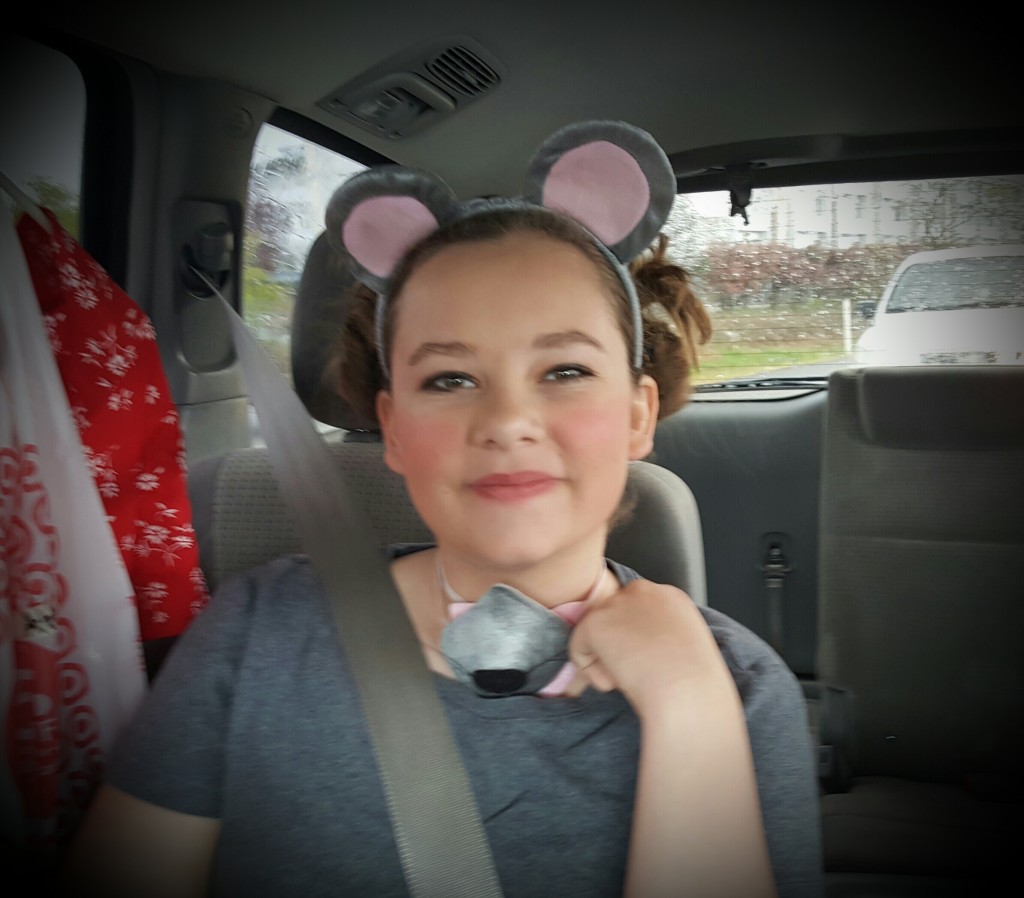 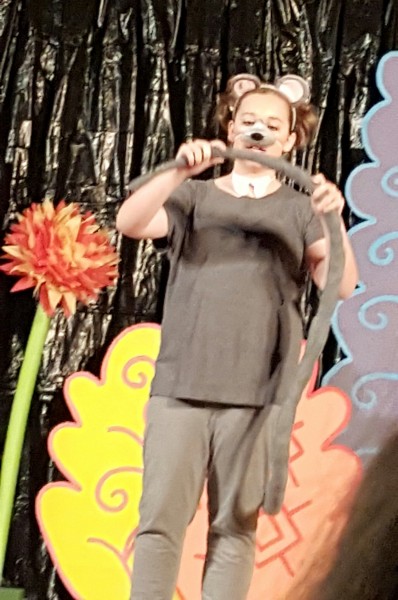 The mouse telling Alice a “tail.”

And, of course, nothing heightens the enjoyment of the evening as much as filling the seats with friends. We were so glad Nancy, Daniel and Julia could come and cheer on David and Sarah. And we were honored that Becca and Beckie came as well. Tomorrow night we’re excited that some more friends are coming as well as the grandparents. We wish Joshua, Rachel and Mamie were in town, and we’re sorry that Daniel has to work this weekend and misses the fun. 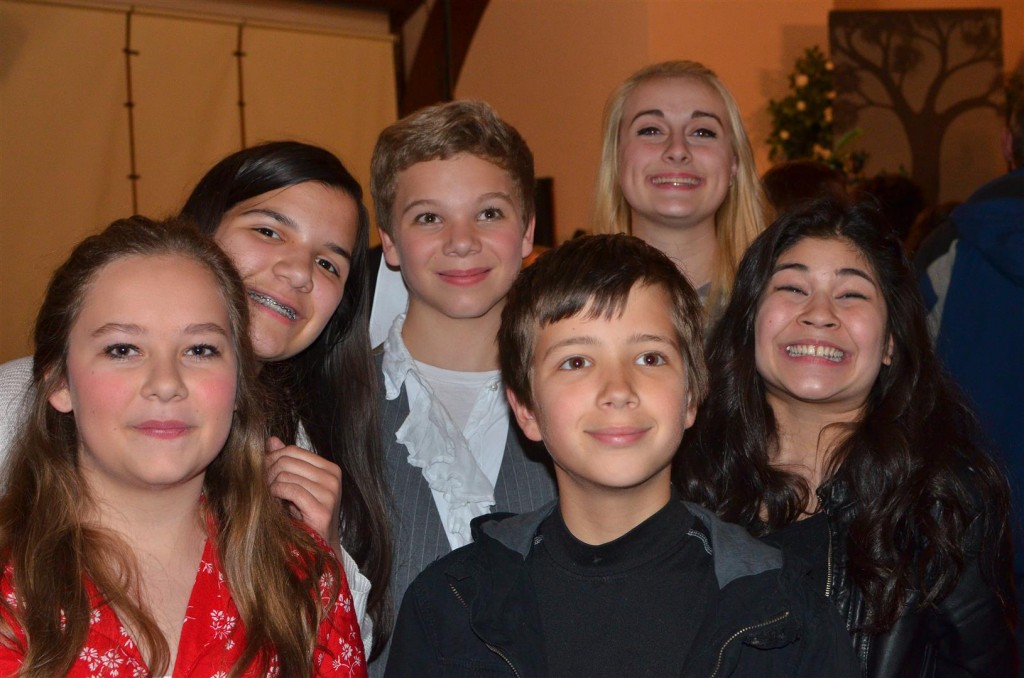 Sarah, David and a few of their fans.

After Sarah’s play ended, the cast and volunteers changed the set and get things ready for the next production. In this one, David stars as Lysander in Midsummer Night’s Dream. David is a wonder! He did an amazing job with a LOT of lines. Not just any lines, Shakespeare dialogue. So challenging. All the kids nailed their parts! I was very impressed. We laughed and laughed at the comedic moments, were moved by the various romances, and hoped for a happy ending! The students (ages 13 to 17) were not intimidated by tackling a Shakespearean comedy and approached the play with gusto and panache. I’m so glad I’ll have another chance to see it tomorrow night for the second performance! 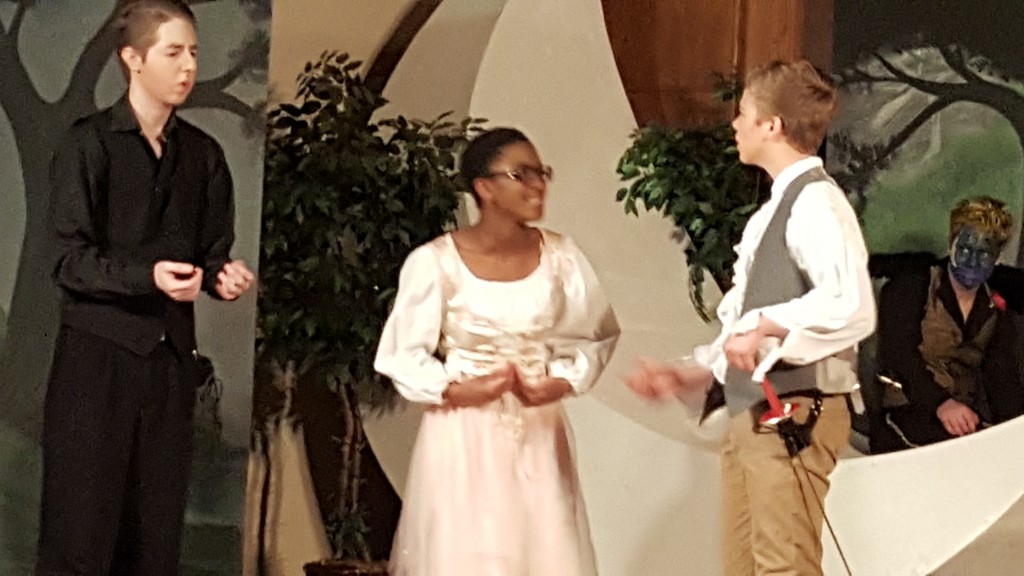 Demetrius, Helena, and Lysander in the middle of a dramatic scene.

It is such a sweet privilege to see your children come under the teaching and direction of talented people, and to watch them shine in a fresh way. I’m very thankful for the directors, Stephanie and Calice, who give so devotedly of their time and energies to teach drama and produce such wonderful plays at the end of the year.