Can a beautiful, leather couch really be nicknamed ‘Dough Boy?’ Does this match the sophisticated, high class image we’re trying to create? Oh wait, we don’t have a chance to create (much less maintain) such an image. We’ll have to stick with ‘comfortable, relaxed, and well-lived in.’ That sounds more like our style (whether by choice or compulsion). 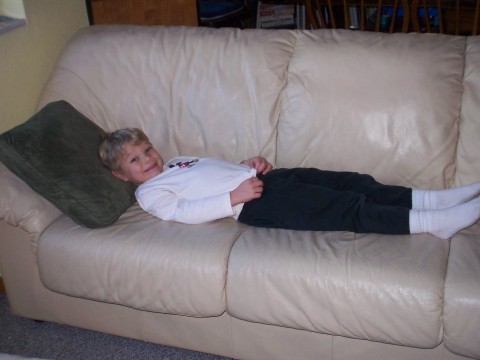 Mind you, some would say ‘Cream Puff’ is a terrible name for a beautiful, cream, leather recliner. Sounds like a poodle or a nickname for your junior high girlfriend. My family seized upon the name, but then they have a strong fondness for cream puffs. Rachel requested them as a dessert for our Christmas party (a la Costco and, of course, sold in a large tub) and they were a huge hit.

So ‘Cream Puff’ is here to stay. I’m still debating about ‘Dough Boy’ but I suspect I am fighting a losing battle. Especially since Tim has put his foot down, or rather his feet up (on the comfy couch).

Of course, in my research (and you must do much research when naming a piece of furniture) the term Dough Boys (spelled as one word) has a long and interesting history.

In this instance I am referring to doughboys, as in the military term for the soldiers who fought in World War I. Not, as may have originally been assumed, the Pillsbury Dough Boy. Just wanted to be sure we were clear on things. I did, however, stumble on a whole line of cartoons around the little Pillsbury guy that had me chuckling. I had to post this one as it makes me think of some friends over at the SHS loop who are occasionally feeling down and tired. 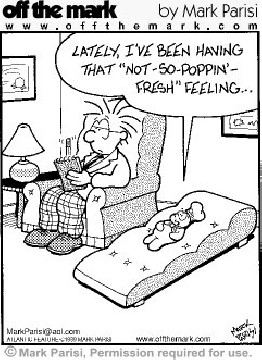 I also came across Doughboy Pools which claim to be “The Original Portable Pool.” But I digress.

Wikipedia defines doughboy as a “now-outdated slang term for an American infantryman, best known from its use in World War I, although it potentially dates back to the Mexican-American War of 1846-48.” 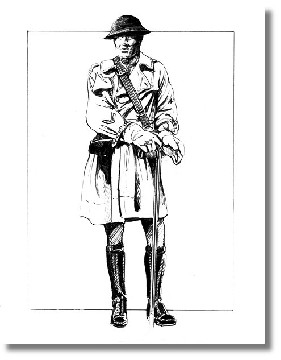 In a historical context, there are many theories on where exactly the name originated. For more information than you could ever want on the term, click here.

“The expression doughboy, though, was in wide circulation a century before the First World War in both Britain and America, albeit with some very different meanings. Horatio Nelson’s sailors and Wellington’s soldiers in Spain were both familiar with fried flour dumplings called doughboys, the predecessor of the modern doughnut…”

I’m feeling just a wee bit hungry. It’s been a while since dinner.

“Independently, in the former colonies, the term had come to be applied to baker’s young apprentices, i.e. dough-boys. Again, American soldiers probably were familiar with this usage. This version of doughboy was also something of a distant relative to “dough-head”, a colloquialism for stupidity in 19th Century America.”

Nice! Why is it that something with the word ‘head’ in it is automatically an insult? Mr. Potato head notwithstanding.

“The Random House Historical Dictionary of American Slang cites several sources from the War with Mexico showing doughboy to be a nickname for the infantry including:

We “doughboys” had to wait for the artillery to get their carriages over.
N.J.T. Dana [An infantryman]

No man of any spirit and ambition would join the “Doughboys” and go afoot.
Samuel Chamberlain [A Dragoon]

And then, of course, there are the extensive theories that surround the origin of the title. I am still amazed that there has been this much discussion on the topic – enough to warrant more than one hypothesis. Not to leave you hanging, here they are:

I must admit that I have done no further research (as mentioned earlier, this is really more information than most people care to know and I am definitely one of those people) so I can’t truly verify the validity of this report. Still, would goggle lead me wrong??

With that I leave you to carry on. Meanwhile I have a strange craving for donuts.