Hmmmm. Since she was sitting at the airport in Chicago, I had to wonder where my mother got that little school update. Surely CNN isn’t running stats on local homeschoolers. I can almost picture it:

“This just in, summer is now officially over as Washington homeschooling family of five begins school, full blast.”

I don’t know. Full blast sounds more like something relating to fire hydrants and stereo systems, not homeschooling. We do have our share of fights over music during the day –

“Mom! He changed my song.” “He’s heard this one 20 million, zillion times, it’s my turn to pick the play list.”

– but that happens all year round, not just during school time. And, of course, doing dishes always brings the temptation to squirt a sibling with the new faucet. Again, this is completely unrelated to homeschooling.

Neither of these things sound particularly academic but then, despite reports to the contrary, we didn’t get a huge amount of schooling done ourselves. It was more like Half Blast, at which point we ended the day with a full regimen of entertainment.

Joshua picked up a friend and went to a beach outing with middle school, promising to bring a group of guys home with him (he’s considerate that way). Rachel scooted off to spend the night with the girls (anything to avoid Joshua’s sleepover). Sarah snagged the little sister of Rachel’s friends and brought her home for a visit. Daniel called up a neighbor boy and asked him over to play.

It’s obviously very important to balance a hard day of school with plenty of fun and games. 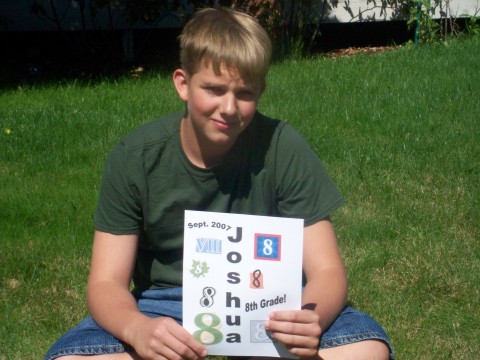 Joshua made an awesome sign, as did the rest of the crew. Sarah wants me to take a picture of her and then print it out. A print of a printed page. Cool.

Of course, even amidst a busy school day, you never know when some celebrities will drop by for a visit. 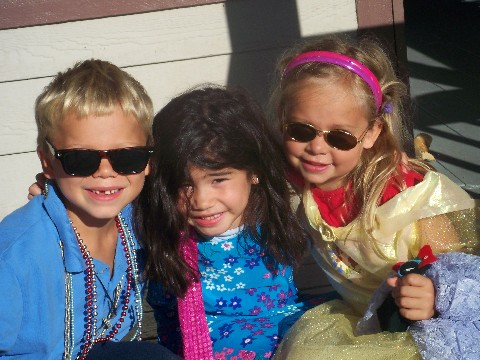 Tomorrow, after we return all the children to their proper homes, we will attempt to get back to school.

7 thoughts on “Trying to Start School”