Well, not exactly an open fire. Or roasting, really. Or chestnuts, to be completely truthful.

It all started on a quiet Saturday. Nobody was away on an overnight, nobody had friends over, nobody had meetings or other engagements out of the house.

Kathy and I opened the day in prayer, asking God specifically that He would help the day to be a fun relational day, and that the attitudes of the kids would reflect the fact that we like being together as a family. At breakfast, as I tickled and laughed with the children, David asked me, “Why are you being like this, Daddy? Usually you don’t act like this. I have been a bit preoccupied many recent Saturdays with work and other responsibilities. Time to have some silly family togetherness.

Around 2 pm, I inveigled everyone into a walk around the lake near our house; although it started to drizzle, we had a good time. As we left the park, I noticed two large chestnut trees, having recently dropped hundreds of their glossy mahogany-colored fruit and their prickly husks. 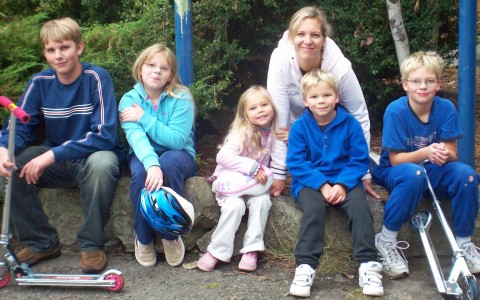 This crew, however, was not particularly prickly about being photographed.

Apparently none of us know the actual words to ‘Chestnuts, Roasting on an Open Fire’, but that didn’t stop us from bellowing out the few lines we did know, on the way home. Following my lead, the children have learned to compensate with volume for a lack of musical talent. Never having roasted chestnuts over any heat source, let alone an open fire, I decided to sponsor an expedition back to the park to harvest the chestnuts.

We gathered bags and bags of them, to the evident dismay of a rather scruffy-looking squirrel, which seemed intent on eating them all. We did him a favor — overdose by chestnuts is probably a painful way to pass from this world. Arriving home, I did a quick search for chestnut recipes online, and we began to prepare a batch of the nuts for roasting on a cookie tray. 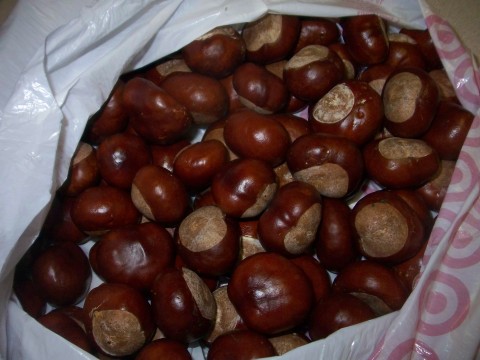 Don’t they just look too good to eat! Our mouths were watering …

Kathy was on the phone with her mom, who was very impressed with our foray into the world of Christmas lore. Unfortunately, she had never actually tasted roast chestnuts, and was not a good source of information on the topic.

I immediately thought of my Mom, who grew up at least part of the time on a farm. She used to tell us stories about the many old-fashioned Christmas traditions they enjoyed. I figured her generation probably had more in common with Little House on the Prairie than the hustle and bustle of this modern age. “After all,” I figured, “she’s old — she probably knows about this stuff.” We got her on the phone.

“Nope,” she answered. “I’ve never even tasted them.” I guess all that old-time Christmas nostalgia is a crock. She compounded my disappointment by mocking me: “Also, watch out for those poison chestnuts. They’re just like mushrooms, you know.”

I rolled my eyes, which had little effect, over the phone. “We saw a squirrel eating them, Mom. Shows what you know.” 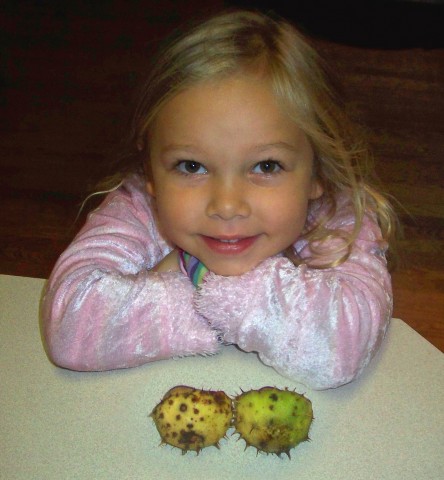 For some reason, we all wanted to show Kathy (who didn’t go nut-gathering) the prickly husks.

Mom was quick with an answer to that. “Ah, but as everyone knows, squirrels can tolerate a much higher level of toxicity than humans.” She’s a hoot, my Mom is. I laughed patronizingly and hung up, threatening her with some of our culinary efforts when she next visits.

Except that this time, she was right.

Prodded by a feeling of unease (that I have come to recognize is from the Holy Spirit), I did a little more research online. As it turns out, Sweet American chestnuts were nearly obliterated in the United States by the dreaded Chestnut Blight, so that most American chestnut trees were wiped out by 1940. Apparently the blight continues, and so even chestnut trees that have grown up since 1940 are often killed by the blight fungus before they reach maturity. Chestnuts eaten today in this country are almost entirely imported. The chestnuts we harvested so gleefully are from an unrelated horse-chestnut tree, toxic to humans (but not, strangely enough, to deer or squirrels). 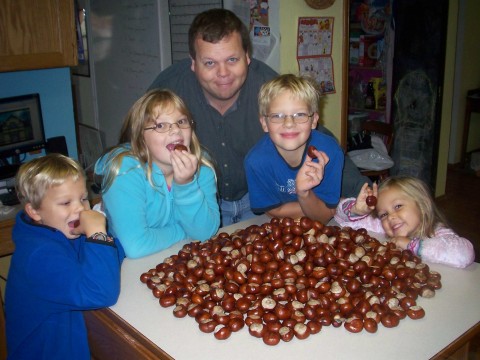 Fortunately, most of us, no longer toddlers, are past the ‘put everything in your mouth’ stage.

I’m told that the horse-chestnuts have a very bitter taste, which may have limited the number we would have eaten, but I felt we had a narrow escape. As I read on one website: “Chestnut poisoning is rarely fatal, but typically causes vomiting, loss of coordination, stupor, and occasionally, paralysis.”

Horse chestnut trees do not produce the â€œchestnuts roasting on an open fireâ€ that Nat King Cole croons about every Christmas. The edible chestnut grows on the European sweet, or Spanish, chestnut. The ones we buy for the holidays are most likely imported from Italy.

Horse chestnuts contain a bitter poison called aesculin. Even though we see squirrels going after them, horse chestnuts are toxic for humans.

Aesculus, baking on an aluminum cookie sheet,
Drizzly mist, falling on your ears
Yuletide carols, being sung out of tune
and folks without raincoats, standing in the rain.

Everybody knows, some stomach ache and stupor
help to make the season memorable
tiny tots, with vomiting and paralysis
will find it hard to sleep tonight.

… but I don’t want to give away the whole song. I contacted Freddy Cole (Nat’s younger brother) about singing it for me; so far, he hasn’t returned my call.

Gotta Tell Somebody
Do the Puyallup
Socktoberfest

14 thoughts on “Chestnuts, Roasting on an Open Fire”