Apart from teaching us to love Jesus, one of the best things my parents did for me and my siblings was to fail to buy us a TV. Oh, we had a 9″ black & white TV for about 15 months while my grandmother lived with us — she was almost entirely blind and liked the noise for company. And my folks used to rent a TV and a VCR on a few long weekends during the winter for video-fests … so we weren’t completely TV-free.

The rest of the time, we didn’t have one at all. When others talked about “Who shot J.R.?” (I thought they were talking about Tolkien) or the latest escapades of Don Johnson in Miami Vice, my eyes would glaze over. I thought Moonlighting was working a second job, and wondered why it was so popular among high school students. Some people thought I was pretty weird: “You don’t have a TV?” they would gasp. Some assumed that our family was poverty-stricken, and would check to see if I was wearing shoes. Even in those days, not having a TV was unthinkable, for some. 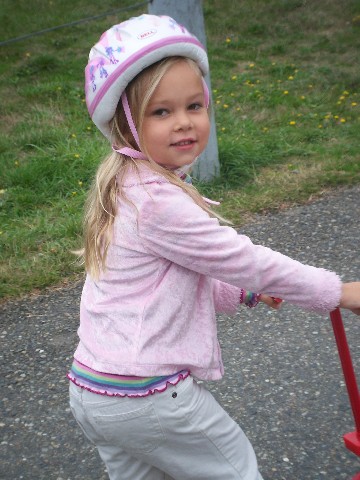 Sometimes it is good to ride your scooter. This was one of those times.

Recent (2006) statistics from Nielsen, according to The Center for Screen Time Awareness indicate that the television has continued to become more and more important in the lives of American families. The average home in this country has more TVs than it has people, allowing each of us (on average) to watch 4 hours and 35 minutes of televised programming, day in and day out.

As a teenager, I began to appreciate the advantages of being TV-free. I was proud of the fact that our family was different, and I would look for opportunities to provoke astonishment:

Friend: So, my Science Report topic is on the Feeding Habits of Giant Squid.
Me: Say, that reminds me, did you know that our family doesn’t have a TV?

I was often very subtle about the way I would work it into the conversation, as you can see.

People used to ask me, “What do you do, without a TV?” Mostly, I read books, played games, rode my bike and played football or tennis. I used to mow lawns and do other yard work; later in high school I worked a job at a local hotel a few nights a week. When I couldn’t think of anything else to do, I did my homework.

When Kathy and I were first married, we decided not to have a TV in our house. Eventually we found a way to watch movies through our computers, and in 2003 we caved and bought a TV for use with our DVD and VCR players. Technically, then, I do have a TV, so I can’t occupy the moral high ground … but I will say that we have never watched any broadcast show on it. We limit what we watch to movies or shows that have been taped or recorded, and we are pretty discriminating about what we watch, and when we watch it. We generally only let our kids watch movies that we have pre-viewed, and we require the kids to pay a poker chip when they do watch a video. Neither Kathy nor I are particularly immune to the lure of TV — we’ve found it best to not allow it a foothold.

I think there are some huge advantages to eliminating broadcast (or cable) TV from your home: 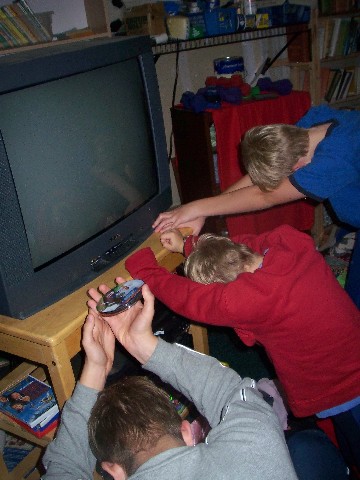 We keep ours in the garage, where nobody can see us making our offerings and burning our incense.

My largest objection to TV, especially the kind that you allow to be ‘pushed’ onto your family, is that it seems to serve as a concentrated avenue, inside the home, for worldly philosophies to attack you and your children. If you watch TV long enough, you can’t help but begin to subscribe to some of the ideas that are ‘preached’.

Do not love the world or anything in the world. If anyone loves the world, the love of the Father is not in him. For everything in the worldâ€”the cravings of sinful man, the lust of his eyes and the boasting of what he has and doesâ€”comes not from the Father but from the world. The world and its desires pass away, but the man who does the will of God lives forever.
– I John 2:15-17

If you are a Christian parent, have you ever thought about what you are teaching your children by letting them watch TV for hours on end? Have you ever considered the effect it has on your love for God, to allow yourself to be bombarded with a world-view that is inherently hostile to Him? Oh, I suppose there might be a handful of relatively harmless shows on TV; but they tend to be the exception rather than the rule, and few can stand up to any serious moral scrutiny. 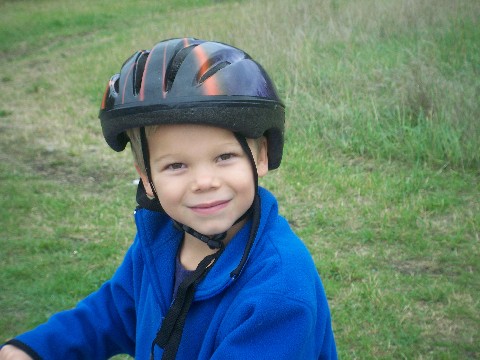 I’ll be the first to admit that we are still a family of couch potatoes, even without a TV. How much bike riding would we do, if we allowed ourselves to watch television?

I could go on and on, but I don’t really need to. And I’m not trying to be all “holier-than-thou” — our family does not forgo entertainment. I’m just trying to bring the idea of living without a TV into the realm of the possible, for your consideration. There are lots of studies and resources available that catalog the evils of television — either you believe ‘em or you don’t. I’ve listed a few that I came across below:

Last, but not least, here is an excerpt from Dee Duke’s excellent parenting seminar, in which he addresses this issue:
Dee Duke on TV (Warning, 6MB file, not safe for dialup.)

While some may tout the educational benefits of television, it is interesting to note this finding from a Zogby poll:

While 59 percent of Americans can name The Three Stooges, only 17 percent can name three Supreme Court Justices.

16 thoughts on “Tuesday Tips for Parenting – Throw Out Your TV!”