I’m roughing it this week out in the woods which means I’m sitting on my inlaws deck stealing their internet access on an old lap top. My cell phone doesn’t work. I don’t have internet at the house (not even dial-up).

There are a few advantages. A humming bird is keeping me company while I type. Bees are flying in and out of the gorgeous foxglove just off the deck. Children are here and there playing with friends.

It’s quiet and peaceful for the moment (until dinner begins).

I have some adorable pictures of David and Sarah as they posed for me on their first day of camp. You’ll have to use your imagination. I even managed to get up early enough to snap some shots of Joshua and his group of CITs (counselors in training) before they walked off to camp.

The week is flying by (as it always does). There was a magician at camp this afternoon. He was hilarious and David was one of his assistants. That moment I even managed to capture on video.

I hope your imagination is REALLY active because there is no way I’m going to upload that in the short time I have before the mosquitoes drive me inside.

A little more than a week ago, I bought a set of patio furniture for Kathy’s birthday, as discussed in Birthday Bash. I was feeling very virtuous because I had used my hoarded computer fund to purchase the furniture, but God was just looking for a chance to show us His love.

It has been a hard month for the budget — we’re over in kids’ clothes and Kathy’s haircut was more than we expected. All year long she cuts hair for the four males in the house — probably 30 haircuts or so — and we put aside a little money each month so she can have a salon cut and some highlights. Somehow she ended up with some higher costs and a third color, and went over by $46.00. 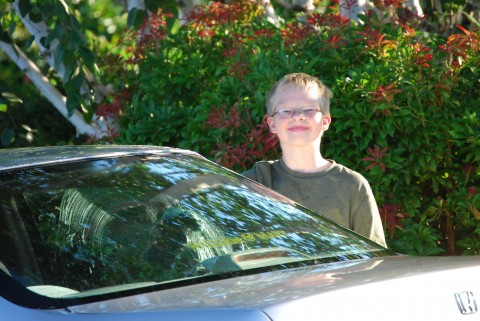 We also save a lot by never washing our cars …

We recorded some birthday expenses, because I wanted to know if I had any money left. Seeing that I still had a little cash in my Tim’s Miscellaneous, I offered to pay the difference for her haircut. “After all,” I suggested, “a man’s gotta have his wife look good.”

Actually, I’m just pathetically grateful that she’ll cut our hair. I’d be shelling out at least $300 for all those haircuts, and I’d still have to pay for her to get her hair cut.

I bargained her up to $36 (I’ve always been a sharp bargainer) and she rushed off to Target and Fred Meyer to spend some more. She called me from the store while I was out puttering with my tomatoes. It turns out that the patio set was on sale (even more than it was when I bought it). I encouraged her to ask if they would do a price adjustment (or whatever they call it) since we’d bought the furniture so recently. “Yep, they will,” she told me gleefully. 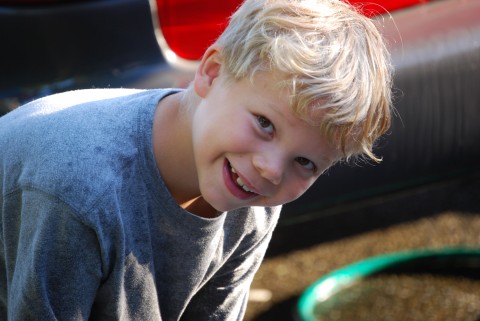 David was gleeful too …

I jumped in the car with the receipt as soon as she returned home, and rushed to the store, fearing that the clerk who agreed to give us the deeper discount would leave, quit or be fired before I could get there. But my fears were groundless; they cheerfully agreed to credit me the difference of $108.80!

There are several morals to the story: 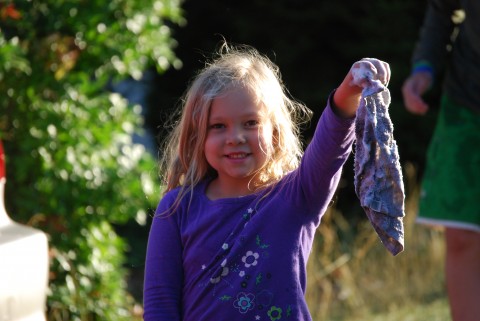 “Anyone want to take a turn washing? I’ve got to do my nails … “

A special thanks to Fred Meyer stores for giving me such a good deal on patio furniture. An even bigger thanks to God, for leaving me some money in Tim’s Miscellaneous so that I can balance the budget at the end of the month.

It was sunny and beautiful on my birthday which means I was able to be gracious today when the sun hid behind clouds all day like a naughty puppy, refusing to come out and play. 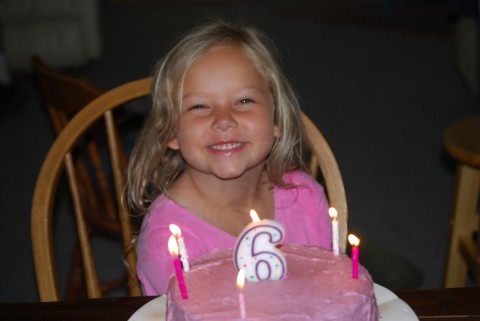 Sarah LOVED her purple birthday cake. Together we managed to blow out all the candles.

Rachel babysat in the morning while the younger children were at VBS and Joshua was off on some lawn maintenance jobs. I managed to sneak in a workout at the Y – glory be my elliptical muscles are rusty. How embarrassing for someone who has logged in many hours on those cardio machines. Use it or lose it, they say.

Sigh. I’m losing it faster than I can pop the popcorn and relax in my recliner. 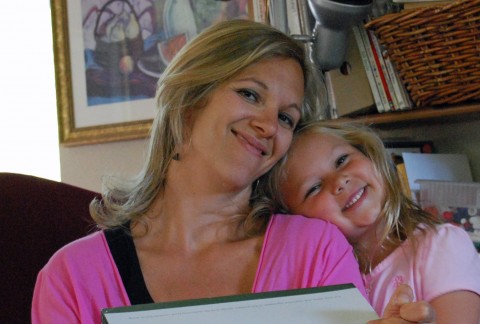 Sarah helped me open my gorgeous new rice cooker from Mamie and Grandad. Thanks, Mom/Dad!!

Daniel spent the afternoon and evening being actively tomato staked. He did some great service projects around the house, blessing the family as he went. 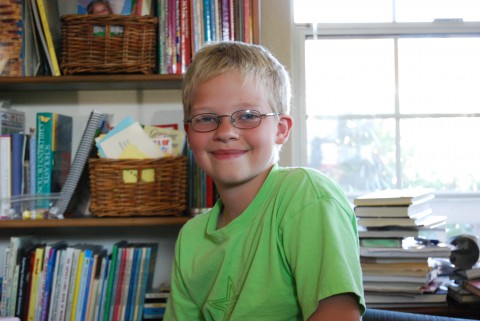 David, Sarah, Rachel and I went to the VBS evening finale and ice cream social. Lots of singing and performing. Nothing like a big VBS program to round out the summer. 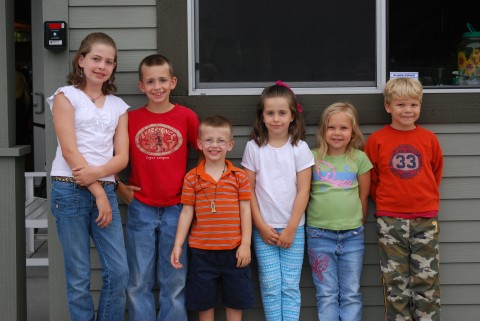 What a delightful bunch of VBS kiddos.

Tomorrow we have some friends coming over to treat us to a (late) birthday breakfast, and then we have all sorts of things to do to prepare for next week’s camp. And so the summer zips along.

Today we celebrated Kathy’s birthday, and also Sarah’s birthday. This year Sarah showed her colors as a birthday ‘player’ — aware that the day is personally special and able to anticipate it, days in advance. On the first of July, she woke up early and tip-toed around the house, turning all the wall calendars to July, giggling happily. She even snuck into the boys’ room as they slept, and turned their calendar forward from June.

Sarah received a number of delightful presents, and was overjoyed to receive each and every one. She is a very satisfying gift recipient, gasping and wide-eyed with wonder almost before she knows what it is.

Kathy has been hinting for quite a while that she would really like to have a set of patio furniture.

“I’d really like a set of patio furniture. Here’s the specific one; I clipped the ad from Fred Meyer (they’re open until 9), and here are your keys,” she hinted. She’s always been a little coy and hard to read about these kind of things. Choosing patio furniture can be a little overwhelming because there are several material types and hundreds or possibly thousands of styles made from those materials. The type of materials that you choose should depend on your personal preference but also on the climate where you live, whether your patio is covered or uncovered, your budget and several other factors. Furniture in the modern home comprises items of furniture, usually relatively small in comparison with the other pieces furnishing a room, which can be used on occasion when required. Such items need not be placed in a permanent position, but can be moved around according to its needs. It is not optional, but usually comprises useful items such as coffee tables and side tables. Click here if you want to know more about the antique table furniture.

“Hmmmm. Are you sure we really need it?” My first line of defense is usually to pretend that I didn’t hear her, but I could sense that wouldn’t work in this case. “That’s an awful lot of money … what would Dave Ramsey say?”

Kathy was unimpressed by my attempt to name-drop. “Dave who? So, anyway, wouldn’t a new set of patio furniture be a better use for that money you’ve been hoarding, than for some stupid computer?”

This was the crux of the matter. I earned about $600 recently doing some side work for a friend, and I’ve been, for lack of a better word, hoarding it to buy a new computer. Our newest computer is almost three years old, which is shameful for a person in my line of work. Besides, there are a lot of games I can’t play with my current setup. 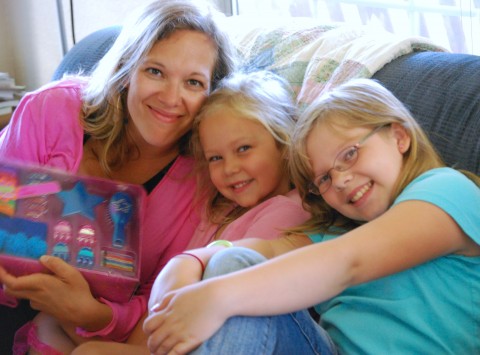 “There is no way I’m giving up that new computer! I’ve scrimped and hoarded at least three or four times, and each time, something more important comes up. Not this time!” The children had gathered as I bellowed, admiring my example of selfless sacrifice. Undaunted, I was firm in my resolve: nothing was going to stop me from buying that new computer.

Several weeks later, I stood in the garden department of a Fred Meyer, across town. My stonewalling had produced one effect: the stores near me had all gleefully sold out of the patio furniture Kathy wanted. “Curses!” I groused. With the help of a friendly clerk, I found one remaining set of patio furniture in a store in the next city over. Using a borrowed van, I bought it and thoughtfully stored the roomful of boxes in a friend’s living room. “It’ll be great,” I enthused, ignoring the way the boxed furniture hid the couch. “You’ll hardly even notice its there, har har.” Later, I heard that my friend’s children used the boxes to make a big fort, so maybe it was OK.

This morning I quietly unloaded the seats from the van and retrieved the patio set from my friend’s house under cover of early-morning mist. I must have been rather convincing in my bluster about not buying the furniture, because Kathy seemed pretty surprised. Joshua and I spent a good bit of the day assembling it, but it seems to have been well-appreciated. We lined up the first four chairs as though they were the thrones at Cair Paravel, and there was much squabbling among the children about which seat was King Peter’s, or Lucy’s.

Kathy’s friend Michelle generously took her out for a pedicure and lunch at their favorite Thai restaurant, which rounded out the day nicely.

Later in the day a few of Kathy’s friends came over for a low-key garden party that I had secretly engineered via Evite. I served fruit and cookies, and Joshua officiated as a Viking waiter. We both agreed that his horned helmet lent a certain dignity to the proceedings. 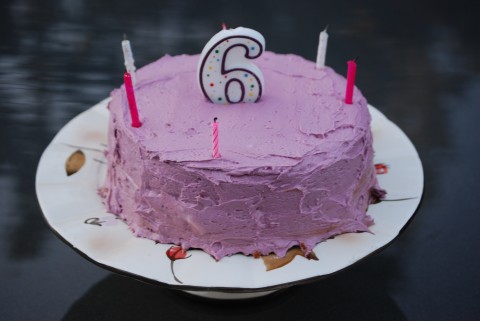 In the evening Kathy made us a delicious steak and potato dinner, and finished decorating a cake for Sarah. A good day was had by all.

Winter Wonderland
WFMW - A Girls Weekend Away
Too Much Coffee

It seems you’re never too old for mud pies. 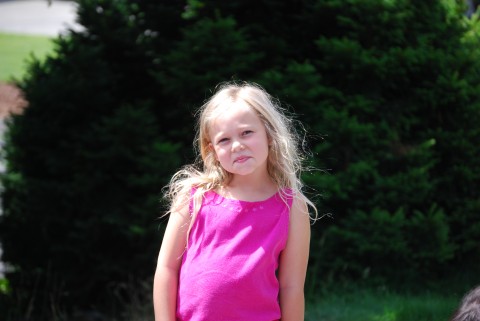 Sarah’s birthday is on Wednesday. She’ll be 6 years old. She’ll still be my princess and baby. 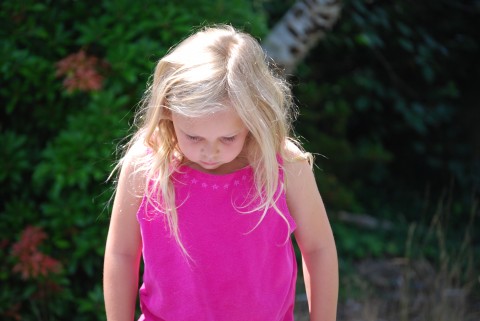 A big pile of dirt just cries out for attention. Sometimes it says, “Play with me! Drive cars up and down my hills. Dig your toes in my dusty layers.”

But today it shouted: “Add water and get dirty!” 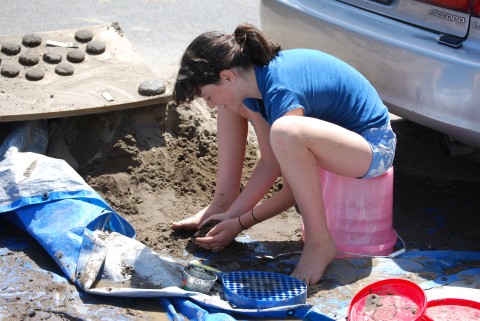 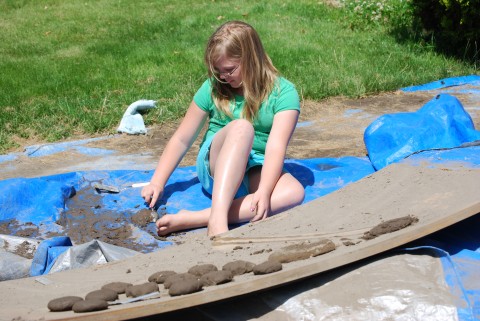 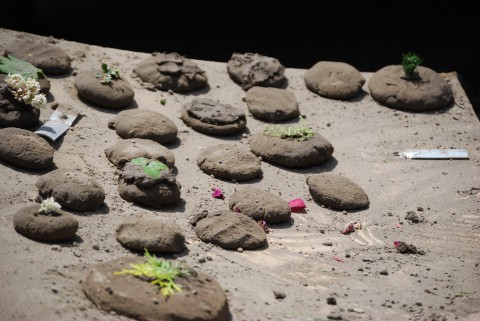 Can I place your order?