When the sun comes out here in beautiful Washington State, it is time to head outside. By ten am this morning, I was determined to schedule some park time for the kids. Yes, I was only thinking of the children. 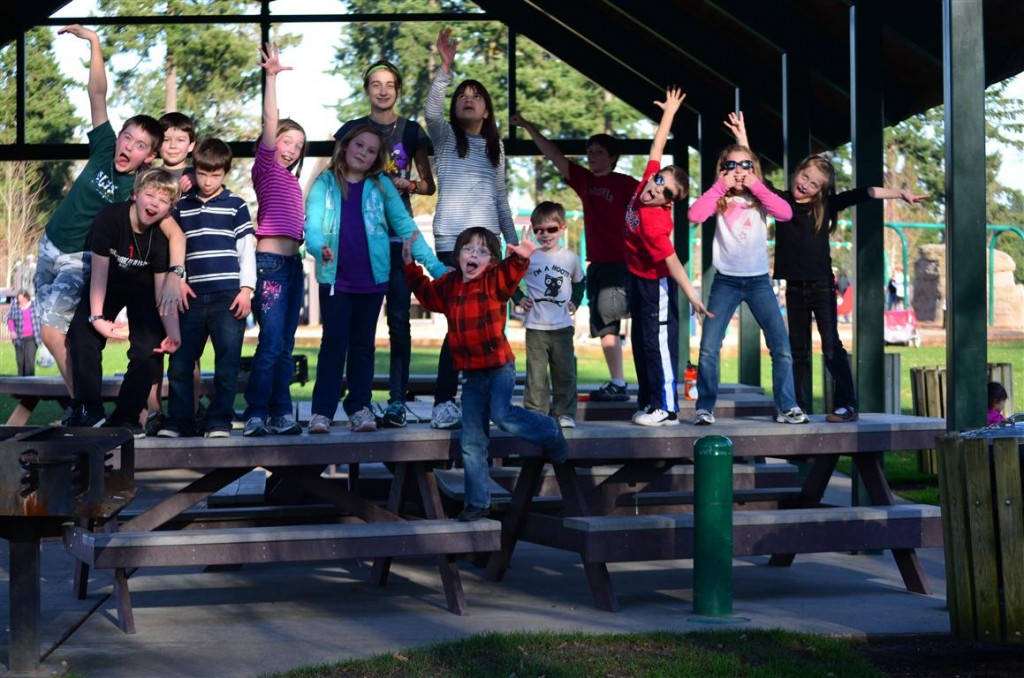 I have no words...what were these silly kids thinking?

I knew David and Sarah needed some play time with friends. It was purely a selfless act upon my part that I messaged, Facebooked, texted, and cajoled as many girlfriends as I could to come and join us at the park for some Sunshine and Fun!! 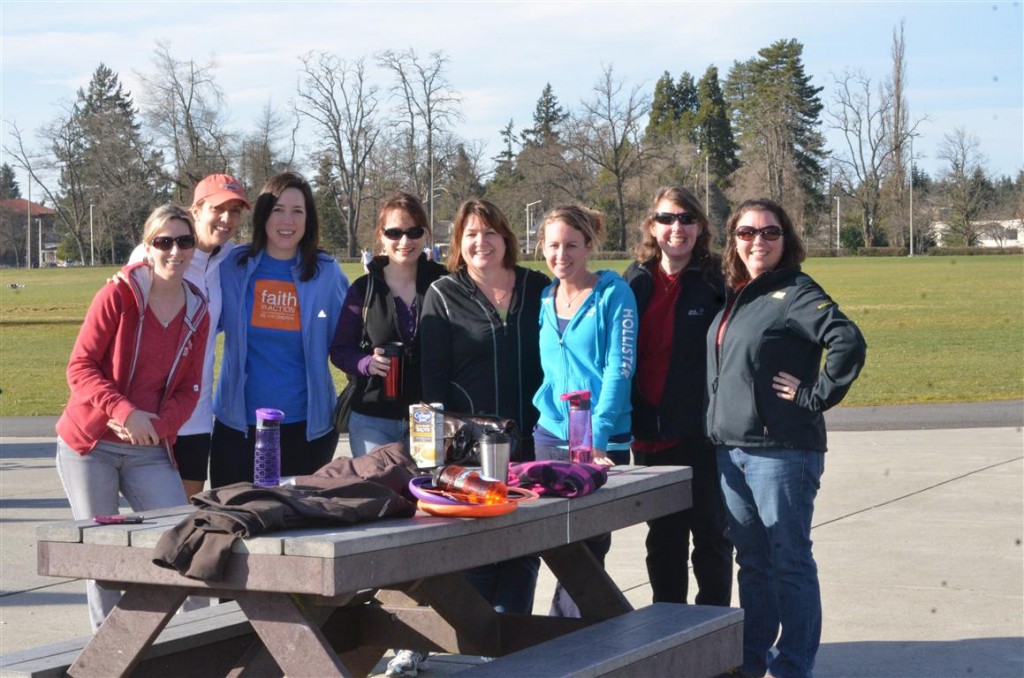 Wonderful friends and lots of laughter.

I am continually amazed and overwhelmed with thankfulness at the unique, godly, encouraging, fun, and beautiful women God has put into my life.

I am so blesssed! 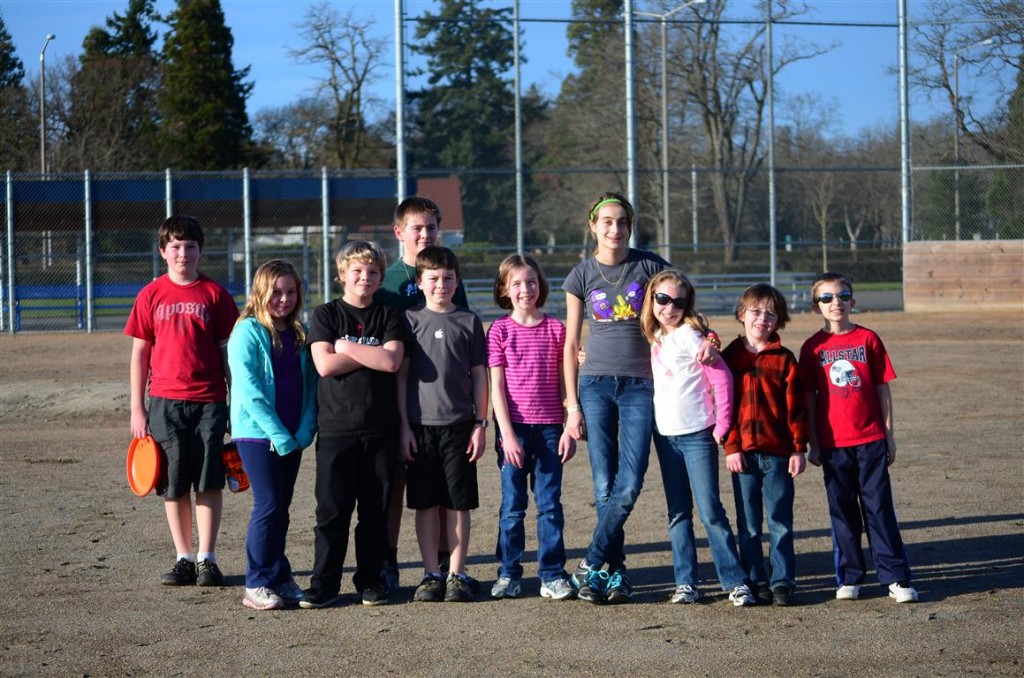 There was time for one round of chase before leaving the park.

Perhaps my favorite time of the week is Wednesday night, after AWANA. This is closely associated with my least favorite time of the week, often about an hour or two before AWANA. (AWANA stands for ‘Approved Workmen Are Not Ashamed’. A weekly program hosted by many churches, AWANA is a little like a Christian scouting program. It involves a lot of memorization of scripture.) 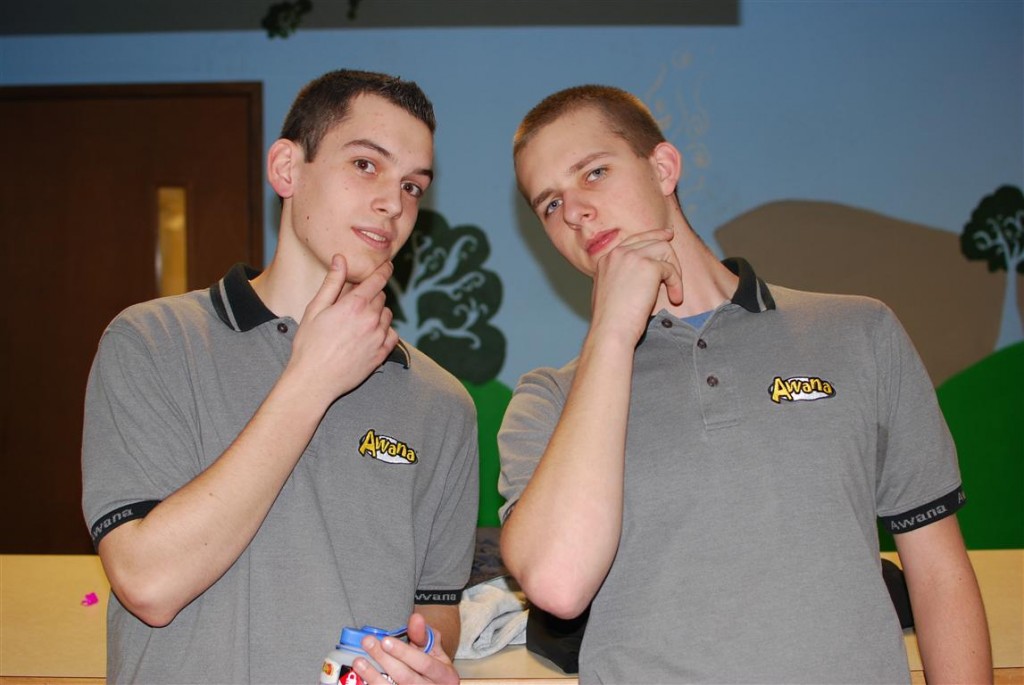 The bold and talented Games Leader Team -- Nate and Josh.

Most of the work of Handbook Time is done by the leaders, who listen to the kids labor through their memorized (or in some cases, not-so-memorized) sections. Game time is handled almost entirely by Joshua and Nate, the fearless grey-shirted Game Directors. But Council Time is always a challenge. How do you get 30 or 40 wiggly kids to sit still for a 25-minute lecture on discipleship? Mostly, I don’t.

Not long after I became the T&T Director, I hit upon a happy solution: performing skits and puppet shows. As it turns out, the T&T kids love to watch the high school leaders appearing in the skits I invent on the train, Tuesday mornings on my way to work. Strangely, the high school leaders seem to greatly enjoy serving as impromptu actors and actresses — they show up, week after week, cheerfully accepting whatever roles I hand them, often as little as an hour before AWANA starts.

This week’s skit featured the first part of the story of Gideon; with Midianites and idol worship and God’s selection of an unlikely hero. In a surprise twist, the younger students (Sparks, Kindergarten through 2nd grade) joined us for Council Time. As is often the case, our skit included lots of physical humor, and a period of pain-staking explanation afterwards, to make sure they understood the key points. 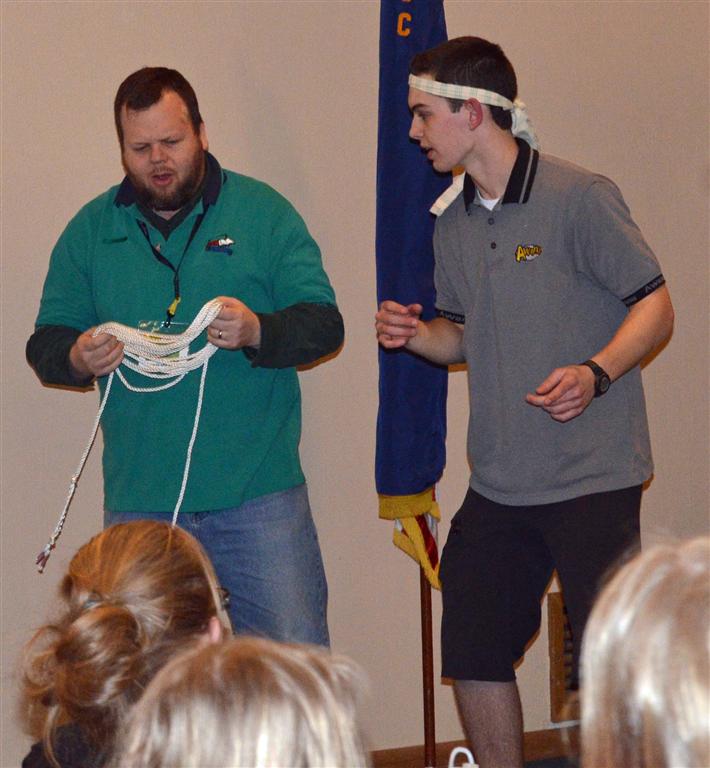 I played the part of Gideon's cowardly servant. "I'll be right behind you," I assured him.

I don’t know why, but I’m often surprised when the Holy Spirit empowers the skit and makes it effective, in spite of my hurried script-writing, and our usual lack of rehearsal time. I dread Council Time beforehand, but am almost always euphoric afterwards, thanks to God’s goodness. I think God must really love these kids, because He seems to pour out His Spirit on our efforts on a regular basis.

Today I went straight from work to a meeting at church, and didn’t arrive home until 10 pm or so. It was a long day. After nabbing a fresh, hot Mesa Manna roll with butter, I went looking for my family members.

No one was on the ground floor. Apparently the Rapture occurred, but the rolls were still warm from the oven, so it must’ve been recently. This was a relief, since I had been meeting, just fifteen minutes prior, with our senior pastor and a bunch of the church leaders — it would be kind of embarrassing if Jesus called all the believers home, and none of the elders were taken. It would have been particularly embarrassing for our Pastor, who has been preaching on Revelation lately. I can just see him in the pulpit, next week:

“Well, I notice that our congregation is a bit smaller this week. I have some good news, and some bad news. First the good news: the prophecies about the Rapture were all true. Now the bad news … ”

Of course, since I was apparently also un-raptured, I was now facing seven years of tribulation — but at least I had a warm, buttered roll. But (as you may already have guessed) it was a false alarm — my family members were all uncharacteristically in bed or otherwise occupied upstairs. Thanks to Kathy’s recent phase of pretending she is a morning person, our household is much quieter in the late evenings.

“Did you blog?” I asked my wife, accusingly, when I tracked her to her lair.

“No,” she admitted, shamefaced. “By the time I remembered, I was already in bed. It was either blog or read my Bible … ”

Kathy often tries to hold the moral high ground in these little interchanges. I charitably refrained from asking her why she didn’t read her Bible in the morning, now that she is “such a morning person”. (I am often charitable that way, leaving unsaid those snippy little comments that lesser men would blurt out, or, even worse, mention in a blog.)

“So, did you at least upload any photos of our fascinating and meaningful life?” I wasn’t very hopeful, by this point. Kathy snuggled more deeply into bed, and shook her head.

No photos, therefore no fascinating and meaningful life. As we often say, “If it didn’t make it to the blog, it didn’t happen.”

Today did have a few interesting events, though. I had my annual review at work, in which it was discovered that I was ‘High Achieving’. This is, apparently, not quite as good as ‘Low Exceeding’, but considerably better than plain ‘ole ‘Achieving’. They used to have a numerical range, from 1 (“here’s a cardboard box, pack your stuff”) to 5 (“you walk on water and found a way to double the company’s annual profit”). Apparently the numerical rating scheme was too hard, and some of the managers were having trouble with the math, so they went to a three-tiered scale: “Not Achieving, Achieving, and Exceeding”.

Personally, I liked the old scale better. When you got a 4.2, you knew right where you stood. I guess after six years working for the same company, in the same team, I probably know where I stand. I was disappointed, though — I really would have liked to get some form of ‘Exceeding’ in my annual rating. Maybe next year.

Last April, Daniel played the part of a blind Prince in a spoof of Beauty and the Beast at our homeschool co-op. Rachel played a peasant girl in the same show, and as the date of the performance drew near, she began to be concerned about Daniel’s lack of facial hair.

Now, of course, we know that I (with my ‘lush beard’) am the true expert in the art of manly beard-wearing, but in those days, I was not yet revealed to the world in my full glory. So Rachel took refuge in her make-up skills, starting (as does any responsible artist) with a curly mustache on herself, just to try it out.

Apparently there wasn’t a lot going on that day, because first Sarah, and then David were swept up in the general dramatic make-over, that was originally intended only for Daniel. 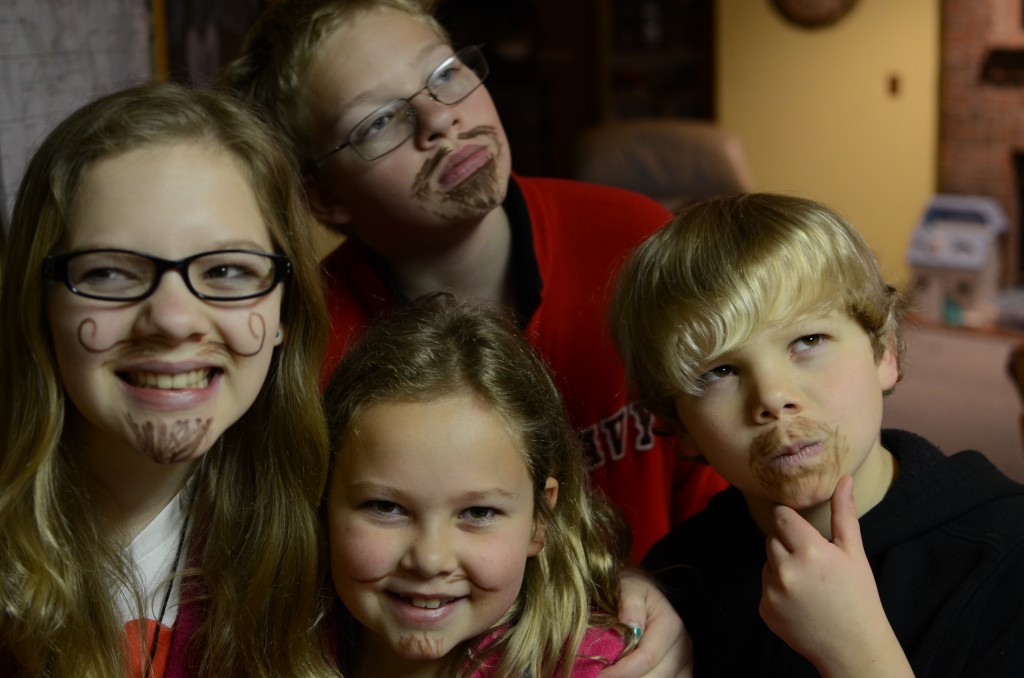 Browsing through the photos on Kathy’s computer, I came across this picture, and it cried out for explanation. Half an hour later, hearing the story of how it came about, I’m still not sure I understand. But I knew it was a perfect candidate for the ‘Lost Days of 2011′ series. Some may think it should have stayed lost, but their opinion doesn’t count.

Let’s just be glad they didn’t find a hedge trimmer or a can of spray paint while time lay so heavily upon their hands.

Figure the Odds
No More Bloggy Hiatus
Tears and Laughter

Sarah’s dear friend, Tarah, came for a Double Night Sleepover this weekend. Sarah and Tarah have been friends since they were three years old. They were born a day apart and have delightfully rhyming names. 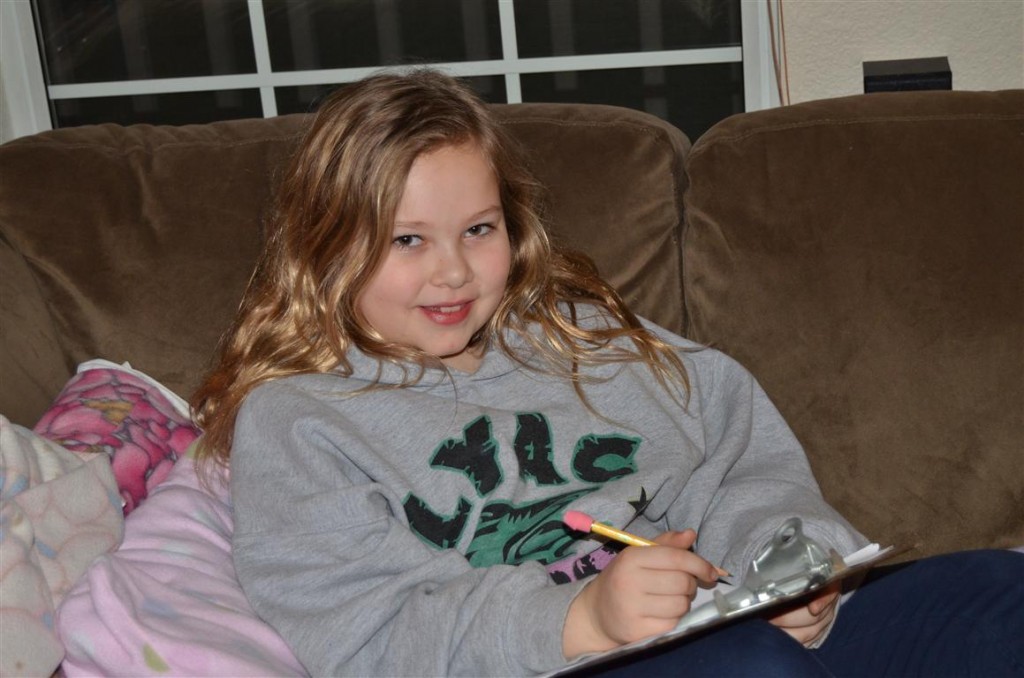 Sarah, David and Tarah spent some time coloring and writing this afternoon. 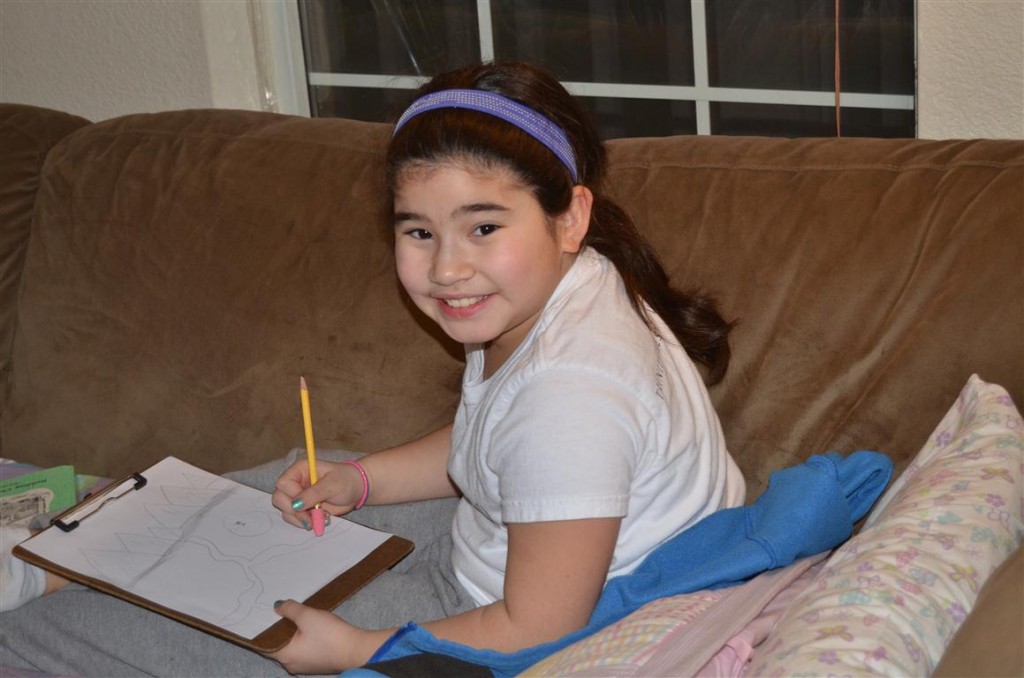 I'm not sure we'll let Tarah go home - we might just keep her!

It just flows so nicely.

We had a lovely Saturday – W2Connect Mentor tea in the morning, cleaning in the afternoon, a quick run to Costco (new glasses ordered for Daniel), home to grab the kids for a matinee. Throw in a handy man who replaced our kitchen faucet, the knob and locks on the front door, AND brought us an amazing dinner, and you can see life is good. 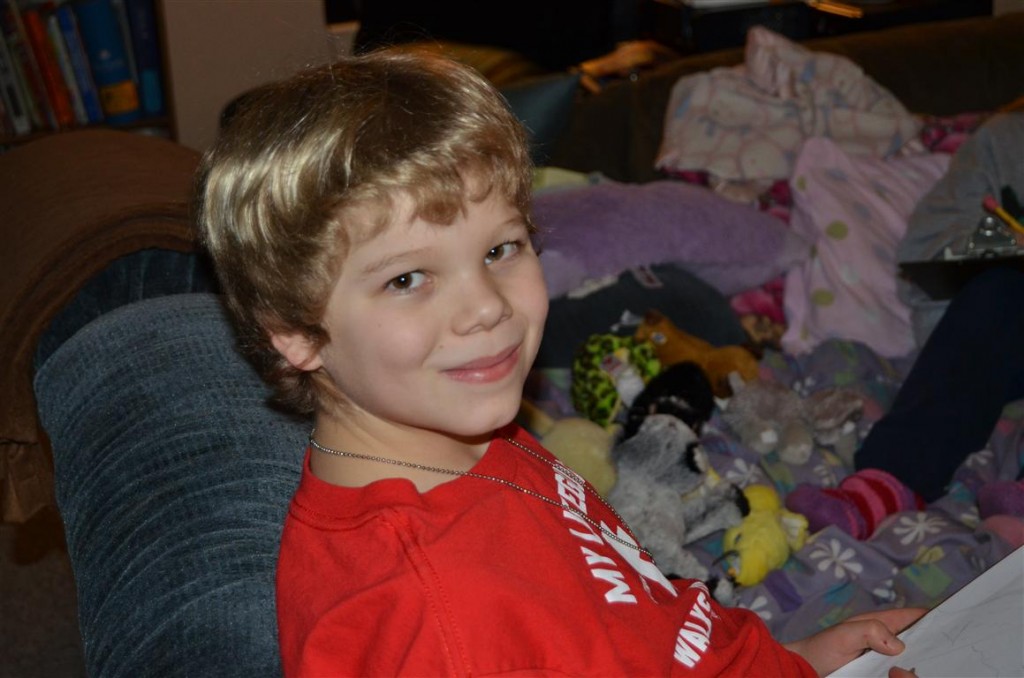 David played frisbee with Daniel and then hung out with the girls - he's a busy guy.

Just another busy day in this crazy thing we call life.