Today is David’s Special Day! After school we met Tim at the Y for swim lessons and some family wallyball. David is improving by leaps and bounds in his serving. I will try to bring my camera with me next week to see if I can capture his athletic prowess on film.

David is a whimsical, funny, incredibly grateful five year old (six in February, gasp!) boy. He will thank you over and over (and over and over) for a special gift. 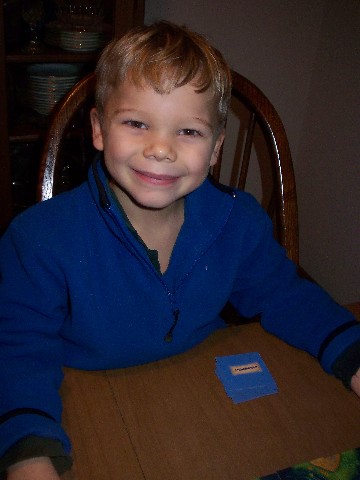 For Christmas he received a blue sweatshirt and walkie talkie watch. These two items have become some of his most favorite gifts. I think he has worn both of them every day this week. Joshua said David saw his green watch on the shelf (that hasn’t worked for years) and told Joshua, “Oh, I’ve always wanted a watch!” That same day we opened a few more presents, one of which happened to be a pair of walkie talkie watches for David and Daniel. David was absolutely thrilled. Isn’t it precious when you get to see a (sometimes secret) delight of your child’s heart met. 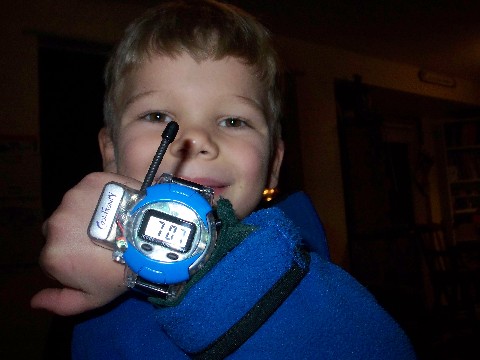 David’s cheerful, grateful spirit often brings tears to my eyes and convicts me of my own attitude toward the Lord and all the good things He gives me. At one point David told me that he had gotten everything he “absolutely, totally” wanted for Christmas. What an amazing outlook. I know that he is young and much of his manner comes from his youthful innocence but my prayer for David is that he would continue to grow in the grace that God has bestowed upon him and remain an appreciative, thankful, enthusiastic individual. 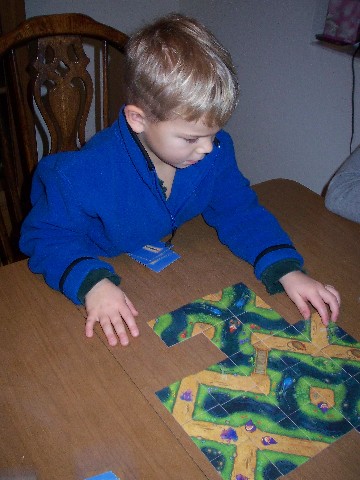 David loves to play games. For his Special Day he chose The Legend of Landlock. This is another one of our new games from Christmas. Joshua advised as David and Tim played and helped lead David to a rousing victory. Ha! 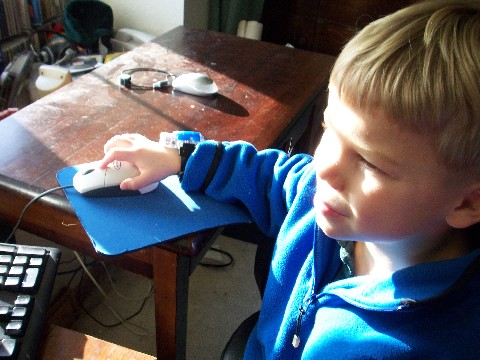 Whether it be computer games, board games, scooter or bike rides, David is NOT one to be left behind. He does his very best to keep up with the big kids. Sometimes he gets frustrated but he most often picks himself back up and starts off again. He is a light and joy in our family.

Another day, another picture, another child. And so it goes. Do I sound weary? Lol. I’m thoroughly enjoying this blogging – nice to have a renewed purpose in my writing.

Not content with just one photography lesson, I decided to see if there were any library books that deal more specifically with digital camera photography. Ta da! There were at least 90 titles in the library catalog. Hooray! There was nothing to do but reserve as many as looked interesting.

The kids will tell you (with deep groans) that this is a very typical pattern for me. We hit an intriguing topic in school and I will stop everything to spend hours on the computer tracking down and reserving every possible title. I LOVE the library online system. It’s like shopping without the cost!!! That is until you lose books or forget due dates and end up with fines. Sigh. That’s the only drawback about using the library as a primary source of reference material. Thankfully the fines are going to a good cause (at least that’s what I tell myself–and my dear dh).

On to the subject at hand–Daniel! 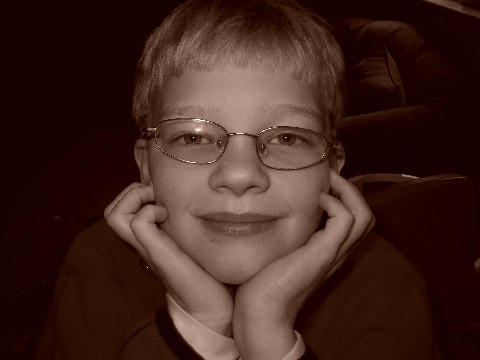 Daniel, age 9, is a (young) man of action. He loves to wrestle, ride bikes, run, rollerblade, anything that involves movement. His motto seems to be, Why walk when you can run and get there (and back) faster? This book, however, has totally and completely captivated him. 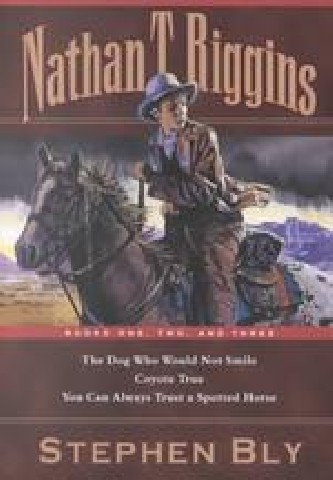 I bought this series,
by Stephen Bly, for Joshua years ago. Rachel read them and thoroughly enjoyed them as well. Daniel is growing in his reading ability and interest so Joshua is working to supply him with books. Daniel recently finished Castle in the Attic and its sequel, Battle for the Castle. Joshua is planning to start him on the Indian in the Cupboard series next (isn’t it nice to have an older brother to ‘help’ you along). 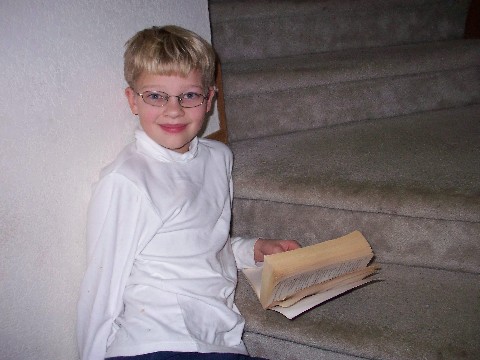 Daniel spent a good bit of time on the stairs reading his book after lunch. I’m not sure that I would choose that spot as a comfy reading nook but he did look cozy and I got several nice pictures of him. 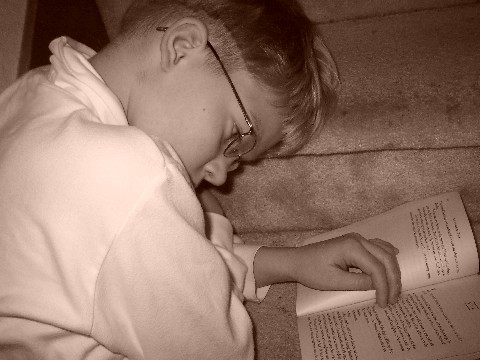 Tim and I come from a long line of avid readers so it warms our heart to see our children develop a love of reading. 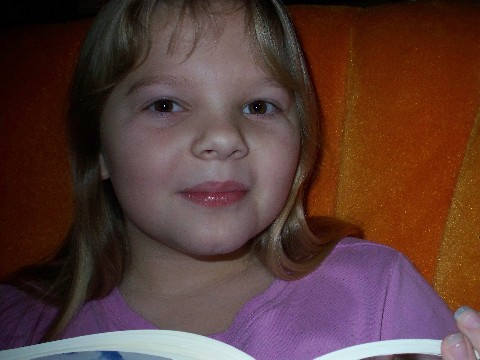 It’s Tuesday and therefore Rachel’s day. Tim decided to also make it her Special Day. He has decided to change Special Days a little bit and center them around the home. Of course, winter in Washington is a good time to make such an adjustment. Ha! Not the best season to be visiting nearby parks or going out exploring. The new plan is that, on their Special Day with Dad, each child gets to pick the game and book of their choice. Any extra kiddos who want to play or listen can join in.

Rachel chose to play Sleeping Queens (one of her favorites from the Christmas game collection) and requested the Voyage of the Dawn Treader as her read aloud. 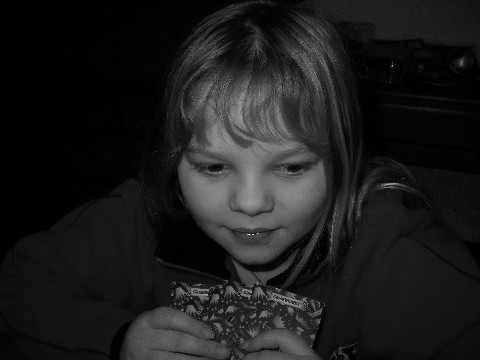 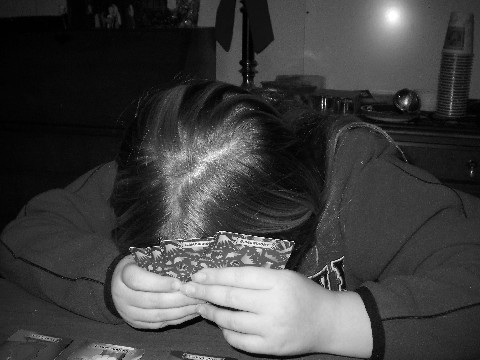 I read a wonderful book on photography this afternoon. We are easing back into school this week and one of the day’s events included a trip to the library. I had several items on hold for me, one of which was a book recommended by a SHS friend (homeschooling e-mail loop). 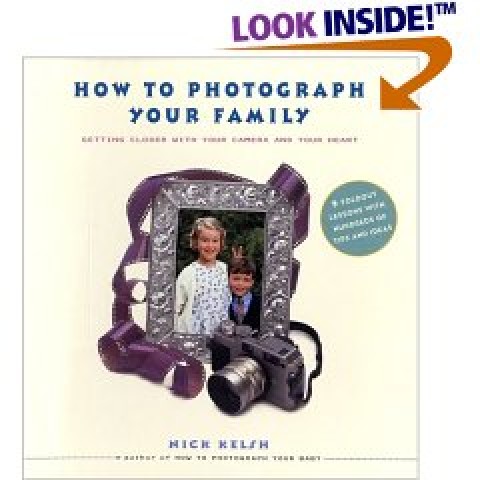 How to Photograph Your Family by Nick Kelsh You can read reviews on the book on Amazon (click on title link). As I think about taking a picture every day for a year I find myself wanting to improve my photography skills. Kelsh’s book was very interesting. His recipe for improving the average amateur photographer’s pictures is: Get closer. Shoot more film. Turn off your flash.

I took all sorts of pictures of Rachel, age 11, trying to capture something sweet, special or unique about her. 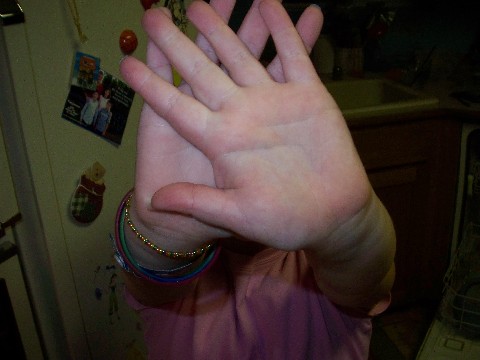 She rapidly grew tired of the exercise and was ready to sit down and do some reading. She had to clean the kitchen first as she has dinner dishes duty this week. Tim especially liked this one (below) because of the little twist in her lips–reveals her wry sense of humor. 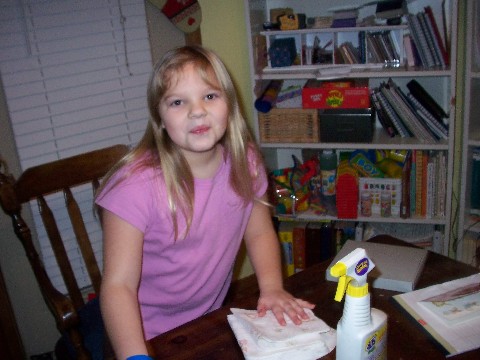 What a blessing to have a daughter! I am so thankful God placed her in our family.

This is the beginning of my Project 365 Adventure. We’ll see where it takes us. I’ve decided to assign each family member a day and proceed through the week that way. The kids thought it was a fun idea and were pleased to hear they would each get their own special day. 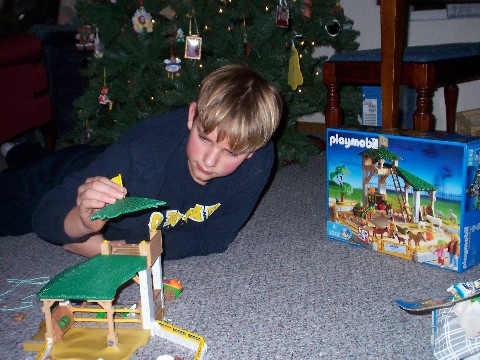 Since today is Monday, Joshua will start off this Photo Journey. These two photos very much capture Joshua (13 this year!). He loves to build and create. Whenever one of the other children receives a toy that requires assembly, they immediately hand it over to Joshua. Because he is so helpful in this way, Joshua is my resource for toy organization projects. He can remember almost any toy part that has come through our home. I only have to hold up the odd shaped piece and Joshua will tell me whose it is, where it came from, what toy it belongs to and whether we still have the additional parts. It’s an invaluable gift in a big family with lots of toys of all shapes and sizes. Here he is putting together Rachel’s new Playmobil farm. 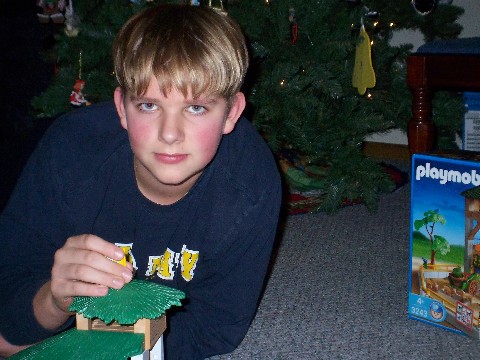 Some friends on my homeschooling loop have encouraged me to start a photo journal for 2007. Here’s the article that sparked the idea: Project 365. Basically the concept is to try to capture a representation of the day in a single photo. â€œPerform photographic experiments. Take a photo of someone new you meet, something you ate for the first time, or something you just learned how to do. Take a photo of something that made you smile. And donâ€™t forget to take a photo of yourself at least one a month so you can remember how youâ€™ve changed too.â€

If possible, you would want to add a line or two about the photo to help explain the story behind the scenes. Nothing lengthy, just enough to trigger the memory.

I am a little bit intimidated about tackling a project that requires daily consistency and commitment. I am a great starter of projects, but not so great of a finisher, and so I make no guarantees that I will end up with 365 entries. Still, I think this might be a wonderful way to capture our year and to enhance our blogging.

I’m mulling over several ways to approach this photo journal. One of my SHS friends (the homeschooling e-mail loop that I’ve belonged to since 1999) is going to center her version of Project 365 on herself. She has another blog that chronicles that life of their family with pictures and stories. She sees the Project 365 as a chance to reflect on her life and it’s direction.

I have journals for each of the five children. I write in them very sporadically. Occasionally I have them nearby and capture a funny or tender moment, but more often journalling is a New Year’s resolution I never quite achieve. I have thought about designating a day of the week to each member of the family. With seven people in our family, it works out very tidily. Monday could be Joshua’s pictorial day, Tuesday Rachel’s and so on. Tim and I would take the weekends. This approach might add a burden to the project (limiting what pictures I can take and of whom) but how delightful to have a special day for each child and end up with a year of Mondays With Joshua, etc.

I found an article that poses 20 Questions to be answered with a photo. This would be a fun starting point or at least a source of some ideas to get the picture taking juices flowing.

It’s January 1st and a time of new beginnings.